7 Sexy ways to put on a condom 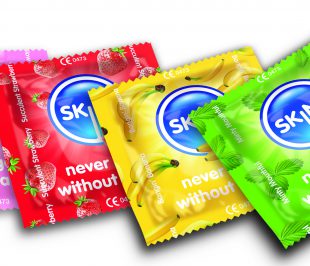 Grab a foil, rip the wrapper, roll it on. This is the bog standard way of putting a condom on a penis, but there are much more titillating methods of doing it that allows the donning of a rubber to become part of your fun rather than a methodical interruption. Like all things sexy, it just takes a little bit of experimentation and play. Lara Worcester from CondomMonologues.com shares 7 sexy techniques for you to try.

Ahead of anything else, you should know the correct basics of how to put on a condom. Carefully open the wrapper and look at the condom to see which way is right side up. Sex educator Megan Andelloux recommends putting it on the tip of your finger, then ask: 'What kind of hat does it look like?' If the answer is, 'The kind of beanie you'd wear because it's cold out, (the roll is pointing down) then it's facing the wrong way. If the answer is, 'Sombrero' (the roll is pointing up) then it's time to party!

Rest the little Sombrero over the head of the penis and with one hand pinch the tip of the condom with two fingers (to keep the air out) and roll it all the way down to the penis base with the other hand. You're now good to go.

This is a popular one that's bound to impress. Place the outside tip of the condom on the end of your tongue and roll it onto your tongue completely. Then place your mouth around his penis and push the condom down onto him with your lips and tongue. Here is Angel Walker's how to video.

Method #2 - Put it on together

Instead of doing it solo and one of you waiting around while the other 'sorts it out', have him guide your hand as you roll the condom down his penis. For example, when you place the condom over his head, tell him to put his hand over yours and roll the sides down his shaft together.

This one is a great visual turn-on and is all about building anticipation. Lie on your back and hold the condom in front of your lady bits. Motion him closer, to the point that the head of his penis is covered by the condom. Pinch the tip of the rubber, as you usually would, and firmly grip the johnny around the head of the penis. Tell him to thrust forwards as he would if driving into you. With your hand securely on the condom, his motion will roll it fully. You'll both enjoy a highly erotic view as the condom rolls down and the gap is lessened between you, but you're both prolonging the final satisfaction. Take a moment for a passionate kiss and give a final check that it's on just right, before allowing him to finish the full, satisfying stroke forward.

Have the condom at hand as you engage infamous 69 position. Make sure you're on top as it's easier from this angle. As he's giving you oral pleasure you can work the condom onto him, integrating it with your tongue and sucking play.

Lubricant adds wonders to condom sex. With one hand, hold the condom by the rim and with the other hand place two drops of tingling or warming lube into the center of the condom. Quickly flip the condom over his member and roll it down to fully fit him. The lube will trickle south, giving your guy ultimate sensation.

When done in a deliberately slow manner you can add some tease to your condom repertoire. Make eye contact as you place the condom over him and slowly inch it down with some licking and stroking, maybe even some sound effects to show you're enjoying this too. Try massaging his balls, perineum and pinching his bum, so you appreciate all of his assets, not just his penis. He'll be desperate for more by the time you've fully unraveled the condom.

Method #7 - Bring him to the brink

Go down on him and tell him to let you know when he's near climax. Once he signals, pull back the oral fun and strap on the condom you'll have ready and waiting for this moment. Being so close to orgasm he'll be really sensitive, especially on the head of the penis, so he'll feel every stroke as you roll it on. Take him inside you and build back up to climax together.

Now you're armed with some sexy new tricks to try, all that's left to do is pick your condoms.

Lara Worcester is editor of Condom Monologues, a growing archive of sex positive stories involving condoms and more. Find out about writing and sharing your own Condom Monologue here.