The year in Sex Toys | A sex toy calendar 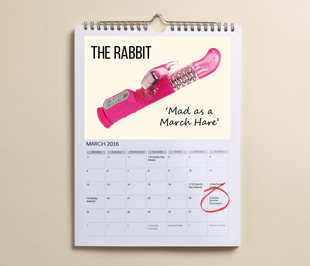 What if there was a 2018 sex toy calendar

There's one gift that I know I'm going to get for Christmas, every year, without fail. A calendar. It's one of those dead cert presents and it always comes from the same person. They also, generally speaking, run along the same lines each year in terms of the type of calendar they get me. Give or take the odd occasion when said gift-giver goes off the rails and buys me one with comical images of goats in trees, or black cartoon cats in the dark, I can mostly expect a nature themed photo calendar full of grand, yet tranquil scenic shots. Each glossy image somehow represents the picture perfect ideology of what that month is all about. A robin red breast singing heartily in the snow for January; a lush green meadow peppered with buttercups for summer in June. You know the kind of thing.

Don't get me wrong, I'm always grateful for the annual calendar. It helps keep me organised. But it would be nice to have something a little….naughtier.
It got me thinking, and because I spend a lot of time thinking about sex toys, I wondered what if a sex toy calendar was created? If each month was to be represented not by a meadow, but by a sex toy. How would it look? What sex toy sums up January, or August and why?

More to the point, apart from me, who in their right mind would hang up a calendar full of sex toys?! Not exactly the kind of family-friendly life organiser you can stick on your kitchen wall.

That aside, hypothetically speaking, if a 2018 Sex Toy calendar were to pop up in the local WH Smiths, here's what I'd put for each month and why.

All partied out. Broke after Christmas. It's still cold, grey and miserable. If we're honest, January is an arse of a month, which is why the humble butt plug is most fitting for the start of the year.

Spring officially starts in March, so feather ticklers are the go to toy. Perfect for dusting away those sexy cobwebs, clear out the sex toy chest and embark on something new and fun to try between the sheets. Like light bondage.

Drip, drip, drop little April Showers. Supposedly the wettest month of the year, but luckily waterproof vibrators means there's no dampening our sexy spirit no matter how torrential the downpour!

Festival and holiday season are in full swing. Both are perfect times to strip off and enjoy some casual hook-ups, or discreet encounters in exotic locations. Small, packable sex toys like bullet vibrators are travel friendly, while a pack of condoms means the holiday season stays fun and laid back, because nobody wants an anxious visit to the STI clinic.

All the best tastes come out in the late summer months: strawberries, mangos and sweet, sweet cherries. So, the most fitting sex toy for August has to be a cascade of mouth-watering flavoured lubricants.

For anyone with a teacher/student roleplay fantasy, September is definitely your month. Going back to school means an excuse for new equipment, but we're thinking more spanking paddles for naughty pupils and sexy uniforms, rather than pens and notebooks. Discipline in the bedroom never felt so good!

October means Halloween and concealing your identity, adding a mysterious eroticism to sex play. OooOO, so spooky, yet sexy! So this month hoods and masks would be the sex accessory of choice, probably with some wrist and ankle restraints thrown into a dungeon setting for good measure. But we're thinking fun, consensual bondage here. Not creepy Halloween psycho.

Urgh, short days long nights as it starts to get dark by 3pm. Time to break out the Fleshlight and let it illuminate the way to greater pleasure! Ok, ok, so a Fleshlight won't shed any actual light on the situation, it would be no good for those pitch black dog walks you're forced to make now it's winter, but they're at least the same shape as a flash-light. The day they invent a glow-in-the dark Fleshlight though, that problem will be sort of solved.

The 2018 sex calendar would show that you can deck more than your halls in December. Delicate and decorative, nipple clamps are perfect for body decoration! I'm not saying you should decorate your lover in nipple and clit clamps in the same way as you would a Christmas tree…although that could be fun…as long as they have a high pain threshold.