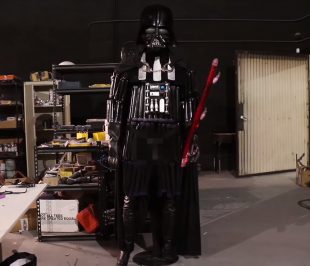 Watch the creation of Darth Vader made from sex toys

We know there's a lot of Star Wars merchandise out there, but we're not sure that when The Force Awakens is released that a Darth Vader made from sex toys is going to be top of the collectors list.

Yep, you heard right. A Darth Vader made entirely from vibrators and sex toys. It's certainly a sentence I never thought I'd hear myself say, but because the Internet is a wondrous thing, someone totally went there.

May the force be in you!

The Darth Vibrader was the ingenious idea of adult content site, Wood Rocket. We're going to make a life size, or bigger than life size, Darth Vader made entirely from sex toys, states host Kayla-Jane Danger before she and her two accomplices head off to a nearby sex shop to stock up on all the kit they'd need to recreate one of cinema's most badass baddies.

By the end of it they'd used well over 300 vibrators, countless batteries, plus many more bits of sex toys to get the right look. Impressive and very inventive, but we still don't think it will become a Star Wars Collectable.

The Force Awakens is released in UK cinemas on 17th December. If you fancy making your own Darth Vibrader, you can find all the supplies you need in our Sex Toy section. Or you could, you know...just enjoy them as sex toys. The force, sorry I mean the choice, is yours!